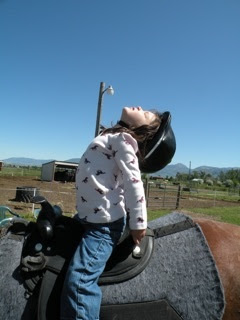 Today was one of those days that sounds good on paper but in truth left me a little frazzled. Morgane (my 4 year old) and I were not in synch, there was a lot of crazy energy going on at horsecamp (our once-a-week mom and daughter fun with horses and lots of other young girls) husband is still recovering from surgery and went back to work much to my chagrin, and I’ll stop right there. But there was a very soothing soul present amongst the chaos, and his name is Tres. As in uno dos tres. Morgane usually rides Tres, a sweet, small half Arab that is wonderful with kids. I’ve ridden him too, and been surprised at the pep he exhibits for a bigger rider. So we already were getting along quite well. Today, I went to catch Tres to saddle him up for Morgane, and while looking out to see where he was, could not spot him. Turns out he was laying down behind the shelter. And unlike most horses responding to the pull of instinct, he did not immediately and quickly come to his feet when I rounded the corner. Was he sick? Was something wrong?! He opened one big eye to gaze up at me. I knelt down to pet him. He lifted his head and sat up, but made no move to stand. I was astonished, as I’ve never been this close to a reclining horse. As I spoke softly to him and pet him, I felt tension leave my body. This sweet boy trusted me! After a few minutes, I encouraged him to his feet and haltered him. As Morgane and I brushed the dirt from his coat, I marveled at his gentle interest in her, the way he turned his head back to see what she was doing, how he allowed her to touch his velvet nose over and over and even dropped his head to let her do so. I felt that ever-present ounce of fear I always have around these beautiful and powerful animals leave my body too, as I witnessed this exchange between my daughter and horse. All my other concerns melted away; it was one of those moments where you want time to stand still. Gracias, Tres, for your gentle energy today. Here’s Morgane doing her saddle camel on him.